Complete new understanding of tolerance and its boundaries

Fresach (22 May 2015) – On the occasion of the first European Dialogues of Tolerance The Denk.Raum.Fresach (DRF) which is an independent initiative for tolerance and integration in Europe has published “Fresach’s Declaration to Tolerance 2015”. The declaration consists of three section and 20 items, in which a profound and current understanding of the concept of tolerance is defined. It was signed by the DRF board and trustees as well as further hundred present participants of the dialogue forum at Fresach and was read on Friday evening at the tolerance museum by the president of the board of trustees, Hannes Swoboda. The former European parliamentarian will be presenting it to the president of the European Parliament, Martin Schulz.

The first chapter deals with the concepts of “tolerance, diversity of opinion and religious freedom”. It starts with the statement, that tolerance signifies respect and recognition and creates peace. Tolerance would be the ability to empathise with other people’s ideas and thoughts. It realises itself where values of equality and justice in personal relationships and also on a national European and global level are implemented. Tolerance presupposes, that all religions practised are part of Europe and that they enrich the cultural diversity and that that fact is respectfully recognised. It means more than the acquiescence at the times of the edicts of tolerance.
Furthermore the declaration states, that all humans have to have the possibility to grow and develop in dignity within their chosen form of life. Tolerance does not mean indifference or to have no opinion and conviction. Tolerance necessitates that ones own conviction is justified and defended as well as that the opinion of others is respected, as far as these are also based on the foundation of tolerance. Tolerance has to be open to doubt and criticism that concerns ones own opinion and has to be able to self reflection. Above all tolerance means debates and dialogues that are based on respect and is incompatible with discrimination and abasement of others.
The second chapter deals with tolerance and its “non-negotiable high significance” in Europe, where people live with diverse religions, colour of skin and regional origin. The European Union, which was founded to overcome racism, ethnic hatred and war, may never question those values. The EU institutions have to defend themselves vehemently against all tendencies within their member nations which restrict fundamental rights and freedoms. After all, tolerance and diversity enrich the life in Europe and defines her particularity.
The third and last chapter places Europe’s relation to global poverty at the centre. The declaration makes plain here that tolerance means the admission of refugees and the creation of liveable conditions – temporarily or permanent – as well as education and work. “Tolerance means to no longer abide the plentiful dying in the Mediterranean see.” Tolerance makes an end to colonialism and neo-colonialism and makes a new partnership with our poorer neighbours indispensable. “Europe has to avoid all military interventions that would provoke a new wave of violence and terrorism. Instead of military interventions we need a credible engagement against poverty and climate change.” 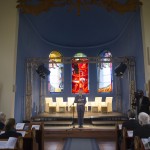