About the search for the Lost Paradise

With the main theme 2018, the initiators of the “Denk.Raum.Fresach”, try to analyze – in the year of the Austrian EU Council Presidency – the manifold issues, irritations and even tensile tests to which the European integration project is currently exposed. What follows on Brexit, how will Spain cope with separatism in Catalonia, and what is the meaning of the illiberal withdrawal movements in Poland or Hungary?

The 2018 European Tolerance Talks will take place during the Pentecost week from 16 to 19 May, the first day (Paradise Day) will be held in Villach with two parallel symposia. The “Love Tour ’18” is intended to support the annual initiative of the Carinthian Provincial School Board “Against Bullying and Violence in Schools” (Großer Bambergsaal, former Parkhotel Villach). A private symposium in the afternoon is dedicated to the “Limits of Growth” in tourism (Hotel Holiday Inn).

The general theme “Yearning for Europe – In Search of Paradise Lost” will be worked out on the following day (Human Rights Day) with speeches, discussions and panels at the Tolerance Museum Fresach. The citizen’s dialogue on 17 May on the Museum Square should also produce real results again, which are written down in the “Fresach European Charter”. Readings, jazz concerts and exhibitions in Villach (“Zimmer frei”) and Fresach (“Lost Paradise”) complete the event with objects from five centuries.

There will be much more to be heard in the 2018 European Tolerance talks about what we can lose in Europe if we do not respect fundamental democratic rights and the constitutional separation of powers threatened in some countries. Especially on the 100th anniversary of the founding of Austria, it must be a major concern to remember the foundations of democracy and freedom and European values.

Another focus this year is set by the initiators with the “Unternehmerinnentag” (Founders Day). The 18th of May will be dedicated to “Future Earth – the courage to start a new life in Europe”, the contribution of architecture to a better understanding of cultures and the “digitization of leisure”. In the evening, young poets and thinkers will create a different perspective on paradise at the Young Poetry Slam. (ws) 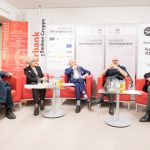